The weekend 10th and 11th December will be a good time to visit Nutbourne Vineyards and stock up on some decent wine. Tours, wine-tasting, refreshments and wine-makers all on hand. If you fancy going give Bridget a ring on 01798 815196  or email sales@nutbournevineyards.com  . Wines on taste will include the Sussex Reserve 2010, Bacchus 2010, Blush 2010 and Nutty 2007 , all silver medal winners in English Wine of the Year Competition .

Not quite sure what this is all about but I am off to Lords on Saturday 3rd December to do a bit for brand support for the Balfour 2008 which will be on taste at the Sparklingenglishwines stand. The website is not much help and I am none the wiser except that the Matt Lucas lookalike is in fact Olly Smith. 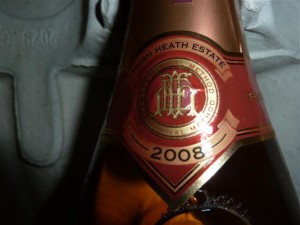 Most of you (anyone I know)will have missed the Balfour 2007 which almost exclusively went to British Airways (First Class) over the summer, as far as I know never reviewed but very well recieved by the mile high club. Step forward the Balfour 2008. Like the 07, a high malic year and not a massive vitage. A relatively late harvest, The Pinot Noir and Meurnier were picked on the 20/10/08  at 72Oc- 13g/l acid and 66Oc -12g/l  respectively. The chardonnay was picked on the 27th October at 68 and 14g/l . Very much pinot dominated, the blend breakdown is 53% PN, 38% CHA and 9% PM.

Made by Owen Elias of(ex) Chapel Down fame, the Balfour is always a vintage wine and always made without malolatic fermentation giving a fresh youthful characteristic to the early releases. The 07 an 08 vintages have and are being disgorged at the new state of the art winery at Hush Heath. They are corked with a mytig cork(an expensive technical cork) which are guaranteed taint free and allow longer post disgorging time on the cork(now 3-6months before release). This is now giving a more complex, interesting and harmonious wine.

The 2008 is an old fashioned pale salmon pink, the mousse is the most sustained of any sparkling wine that I have known, both in the glass and mouth, a very fine and sustained bead,  creamy and not at all aggressive on the tongue . The acidity is high but is balanced by a well integrated dosage of 12g/l.
The nose is clean and Pinot dominated, slightly peppery with hints of all-spice. The palate shows crisp but balanced acidity, herby with masculine hints of red fruit and plum and an attractive citrus finish.

Usually recommended as an an aperitif, this wine is actually a fantastic food wine and can handle and compliment the most robust meals likely to be served up in Champagne, steak, game, sausages and kidneys.

An interesting range of the wine chattering classes miraculously found their way to Hush Heath Winery to indulge in a Riedel wine workshop tutoured by Herr Riedel himself . The aim was to to find the perfect glass for  two English Sparkling wines. The wines were the newly released Balour 2008 and Chapel Down Pinot Noir -Chardonnay 2006 (both made by Owen Elias ) . Using a process of elimination with raised hands and Austrian statistics the best glass (out of fifteen) was selected for each wine . The still Pinot Noir glass was possibly my favourite for the Balfour, probably in line with the trendy practice of decanting sparkling wine and champagne. The overall favourite was a tulip shaped champagne glass. Interestingly the standard ISO tasting glass performed really badly being eliminated in the first round on each occasion. 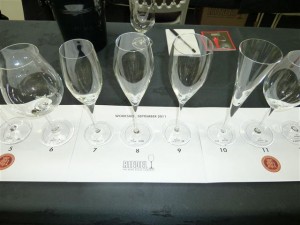 No 6 is the Pinot Noir glass, 7 and 8 were quite popular , 7 being the overall winner.

A further 2.5 ha of vines have been planted at Hush Heath this year. The vineyard is to be known as Middle Stackney Wood, the 3 classic champagne variteies have  been planted in addition to a few hundred Pinot Blanc,Arbane and when we can can get hold of some, Petit Mesilier(old champagne varietals). The rows are aligned North -South at spacings of 2.3×1.2m. The vines were machine planted in the middle of May and the trellis work completed a couple of weeks ago. The dry weather caused some concern but the vines are now well on the way.

Empty tanks are a great sight for the winemaker, the harvest safely in bottle, the annual cycle at an end. A short time for refelection and review before it all starts again in 3 months time. last week the Nutty 2010 was bottled together with a new sparkling rosé made from 100% Pinot Noir and bottled in clear magnums.

On the competition front the 2010 wines Bacchus, Sussex Reserve and Blush were all Silver medal winners at The UKVA wine of the year, more importantly they all taste delicious.The Nutty 2007 (silver) is also drinking very well.

The new plantings of Pinot Blanc and Bacchus have grown well this year ,so well in fact that the trellis work is being erected in the next couple of weeks.

July the 12th saw the annual UKVA Wine of the Year competion awards ceremony at the House of Lords.Sandhurst Bacchus 2009(dry) won The Wine Guild Trophy for best wine from any other vintage, while the Sandhurst Bacchus 2009 (medium) won the Tom Day Trophy for best varietal wine. The wines are ridiculously underpriced (at the moment) and are available at the vineyard , Hoads Farm, Sandhurst ,Kent TN18 5PA if you are passing.

Nutbourne Vineyards won Silver Medals for their Bacchus , Sussex Reserve and Blush 2010 as well as their Nutty 2007 sparkling, all produced and bottled at new Nutbourne winery. Their wines will be available at the forthcoming Glynde English Wine Festival this weekend as well as from the vinyard .

The first two still wines from the 2010 vintage at Hush Heath have been bottled on the newly commissioned line at Hush Heath. First down the line was the 2010 Chardonnay (Skye’s )  a pure terroir influenced Chardonnay , un-fined and un-filtered and un-obtainable. Bottled in clear burgundy with Diam corks and screw-cap . Pale green straw,limpid and viscous, citrus,apple ,herb and salt. Chablis eat your heart out.

Nanette’s English Rose which was first made in 2009 makes its 2010 debut ,still unique in its use of the three champagne varieties, a dry , light and refreshing rose soon to be found in an HdV near you.

The first sparking wine to be bottled on the newly commissioned line at Hush Heath took place a couple of days ago. The wine , a Blanc de Blanc is the first white sparkling wine to be made at Hush Heath part of an occassional series of one off exceptional cuvees. Only 1500 bottles are being produced in clear white bottles. The chardonnay picked on the 21st of October 2010 was of the highest quality and 1200 l was held back from the Balfour blend to create this unique and very limited edition. It will probably spend between 2-3 years on its yeast before release , expect no more during this period of purdah.

The IWC Gold medal for Chapel Down Brut (2006)was made by Owen Elias . As it unlikely that credit will come from any other quarter I give myself a pat on the back. This is the 3rd IWC Gold medal won by Owen Elias . Other highlights were Silver for Balfour Brut Rose 2006 and Bronze for Nutbourne’s Nutty 2007.