Those of you contemplating making a living selling English Wine to our supermarkets are well advised to wander the isles and take a look at the prices and the offers. Even at English Wine friendly Waitrose the pressure is on. Chapel Down Brut is currently £16.99 as is Ridgeview Bloomsberry 2008 -20% off , Nyetimber  2005 is currently on offer at £22.99   20% off. Ridgeview Fitzrovia (rose) is £22 . CD Brut moves through pretty well anyway(being a bit of a bore I count the bottles when I visit) but unsurprisingly really motors at its £12.99 promotional price which happened 2-3 times last year. Both Ridgview and Nyetimber have been on “promotion” in the last 6 months. On the still front we had a brief visit(I think it was in January) from a very youthful  Bolney Pinot Grigio 2010 £9.99, aside from that, only the usual CD suspects, English Rose, Bacchus and Flint Dry. Interestingly our local Tesco(built after promising to support local produce) has no English Wine and has not had any since putting in a couple of cases sortly after opening,  a generous act never since repeated. 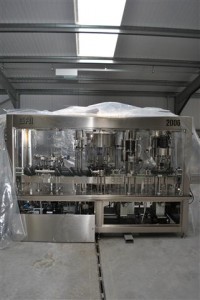 The business end of Hush Heath’s new bottling line has arrived to be installed and commissioned over the next few weeks. Truly versatile, it is capable of filling anything from 25cl to champagne magnums . Its is equipped to use cork,screw-cap and crown caps and will be used to bottle the 2010 Hush Heath vintage of Balfour, Nanettes English Rose, and a couple of other surprises.

Preparations for planting at Nutbourne are moving ahead . Nearly 4000 vines – Pinot Blanc and Bacchus will be planted at the end of April. Seveal tonnes of lime and fertilizer are currently being spread. Pruning and tying down are now complete and budburst due in about 2 weeks time.

The recently installed Disgorging line saw action for the first time yestereday . The first lot of NUTTY 2007 was disgorged, it will be released in several weeks time . The 2007  is  blend of 50% Pinot Noir and reichensteiner and other grapes grown at Nutbourne vineyard. It is a very English taste , dry, lightly aromatic, hedgerow, attractive and very dirinkable.

For  some of us with long memories, Englands first champagne tank press about to start its final journey. Originally installed at Rock Lodge Vineyard by Norman and David Cowderoy it later saw heavy action at Chapel Down before being quitely retired several years ago. Beautiful juice and a nightmare to use. R.I.P. 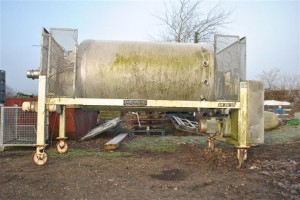 The vines are being left with extra canes which will be cut off after the risk of frost has passed. 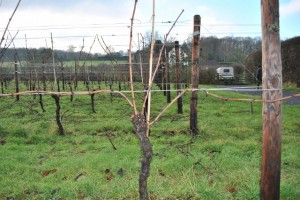 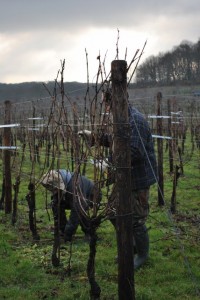 Dithering and keen the winter comes,

While comfort flies to close-shut rooms

And sees the snow in feathers pass

Winnowing by the window-glass,

Whilst unfelt tempests howl and beat

Above his head in chimney-seat.

On hob reclines the corners’s guest,

Reading the news, to mark again

The bankrupt lists or price of grain,

Of flooded fields and clouded skies,

With frost and snow and many a storm,

And wisdom gossiped from the stars,

Of politics and bloody wars.

He shakes his head and still proceeds,

Nor doubts the truth of what he reads:

All wonders are with faith supplied-

Bible at once and weather-guide.

Puffing the while his red-tipped pipe,

Yet not quite lost in profit’s way

He’ll turn to next year’s harvest-day,

And, winter’s leisure to regale,

Dee Blackstock was an early visitor to the brand new Hush Heath Winery. Dee tasted the range of juices and base wines from the 2010 and is seen here enjoying what appears to be Pinot Noir pressings . Victoria Ash,winemaker, looks on. 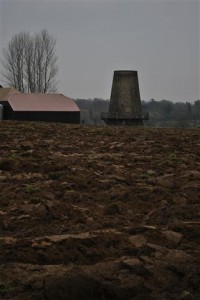 The ground is being prepared for new plantings at Nutbourne Vineyard in Sussex and Hush Heath in Kent .

Nutbourne have removed some poorly performing GDC vines, approximately 1.5 ha of vines are being replaced. Bacchus, Pinot Gris and Pinot Blanc will be planted for quality still wine production . 2 ha of Pinot Noir and Chardonnay  will come on steam in 2012. 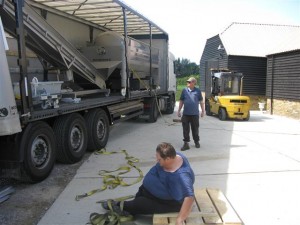 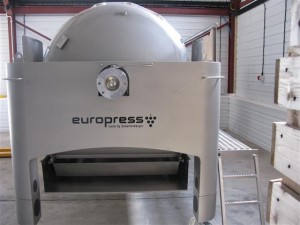 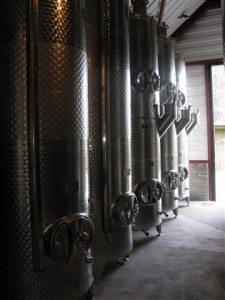 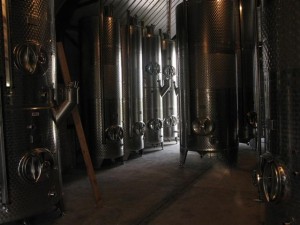 Tanks and Press installed at Nutbourne Redfold Winery in preparation for the 2010 harvest .

A beautiful and extended prose poem to the southern chalk counties of England in the years before the First World War . First published in 1909 , a centenary edition has been reprinted by Little Toller Books  an imprint  of the Dovecote Press. www.dovecotepress.com . A small but interesting list of re-prints , well produced and reasonably priced .