When it comes to Saints and wine there is a fair amount of choice and with clever planning it would be possible to be legitimately drunk for up to a dozen days a year . One has to wonder what the wine connection is  with some of them, being grilled on a gridiron seems to have been a popular start.A martyrs death is almost a prerequisite . St Vincent of Saragossa is a case in point, popular in Burgundy , the patron saint of wine and vinegar makers , his day is the 22nd of January , probably not my choice.

More interesting might be St Trifon Zarezan, a Bulgarian vine grower whose meeting with the Vigin Mary  caused him to prune his own nose. Otherwise known as St Trifon the  Drunkard or St Trifon the snub nose , he is much more my style and is so popular that his day is often celebrated twice (for 3 days!?) on the 1st or 14th of February  using the old and new calendar dates. The 1st of Feburary being the traditional date for the start of pruning. (English growers take note) . The more wine poured on these dates the bigger the next harvest. 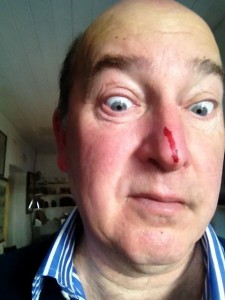 For those of you who can’t wait for a fortnight St Armand of Maastricht comes to the rescue on the 6th of February . Patron of brewers,innkeepers ,bar-tenders,vine growers, vintners,wine merchants and rather bizarrely Boy-Scouts.

February is a bit crowded  it has to be said , the 17th gives us St Walter of Portnise.

Followers of the orthodox calendar can enjoy  St Nicholas of Myra ( Santa Claus ) on the 9th of March or alternatively on the 6 th of December, St Nicholas is also the Paton saint of Liverpool.

Appropriately there is now a gap until the 3rd of June when St Marand is remembered, chiefly for surviving the whole of Lent on a bunch of grapes. (The miracle of the source of the grapes is not revealed.)

In July we have St Goar of Aquataine  on the 6th and St Urban of Longres on the 23rd. St Urban has some connection and reason to be thankful as he hid in a vineyard to avoid persecution. Not sure how it panned out in the end.

The meteor shower that falls from the Swift Tuttle comet around the 10th of August are know (to some) as “the burning tears of St Lawrence ” . St Lawrence of Rome is another who met his end on the gridiron. Keeper of the Holy Chalice, patron Saint of the  cider making Ampleforth monks, he is more traditionally linked with cooks and chefs.The reliquary containing his burnt head is apparently to be found in the Vatican .

St Martin of Tours, the patron of winegrowers and beggars (appropriately enough)was the first non martyr to become a saint. His day can be  celebrated without guilt on the 8th of November .

If you have not had enough over Christmas, St. John the Apostle gives you an opportunity on the 27th of December or for the Greeks  the 8 th of  May.